On 24th February our 2nd year undergraduates embark on the Studio Project Module PR5001, where students collaborate to work together on group projects.

This module is the culmination of the second year of study at Escape Studios.

The Studio Projects are designed to simulate as closely as possible the experience of working on a live client project.

The Studio Project is worth 45 credits, starts on Monday 24 February, and runs until the end of May, with a week off for Easter.

The Studio Project is broken up into two projects, giving students the chance to practice digital film-making twice in a short space of time, and polish their story-telling skills.

Project Briefs
Students can select from a number of project briefs, which aim to simulate as closely as possible the kind of projects that animators will be working on in industry.

As with all narrative projects, students begin with a concept, develop this into a story, and write a short script.

Once the script is approved, students begin to storyboard the project, and edit the boards into an animatic, complete with narration, music and sound design.

Golden Acorn
To see an example of a successful teaser trailer created in this module, check out The Golden Acorn below.

Golden Acorn has had extensive festival success, including winning the Best Teaser/Trailer at the 2019 Golden Nugget International Film Festival.

To see other documentary projects completed by our students last year, follow these links:

Group work
The first task is for students to form themselves into groups, and decide among themselves who will perform what role.  Key roles include director, producer, writer, storyboard artist, art director, editor and - of course- animators. Projects will also need a CG supervisor to manage the digital pipeline and make sure the final render is successful.

Project Brief 3 - Short film
The final project brief is to make a short film, ideally no more than 90 seconds in length. To see a successful example of a short film made here at Escape Studios, take a look at multi-award-winning Adam & Eve Mk II below:


Group work
The first task is for students to form themselves into groups, and decide among themselves who will perform what role.  Key roles include director, producer, writer, storyboard artist, art director, editor and - of course- animators. Projects will also need a CG supervisor to manage the digital pipeline and make sure the final render is successful.

Rookies
The Studio Project takes us up to the end of May 2020 and is the last project for the 2019-20 academic year.

Whichever creative brief our students choose, they must enter the final film into the 2020 annual "Rookies" contest.  Entries open on 7th March. 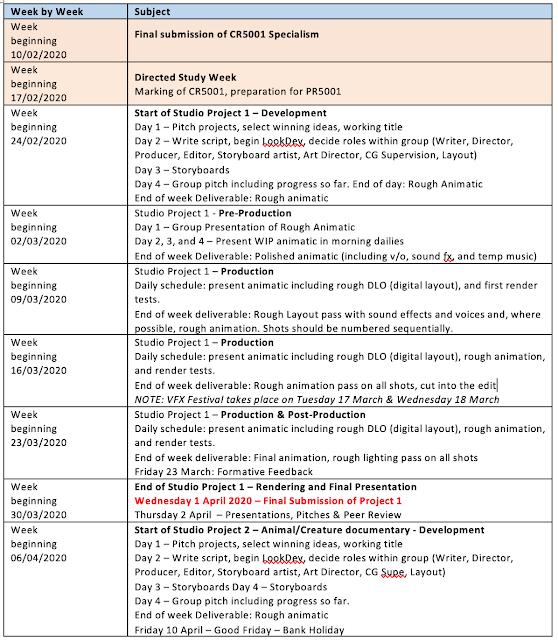 Easter Bank Holiday
Friday 10 April is a Bank Holiday, and students then have a full week off week over Easter from Monday 13April. Classes resume on Monday 20th April, and continue until the end of May. 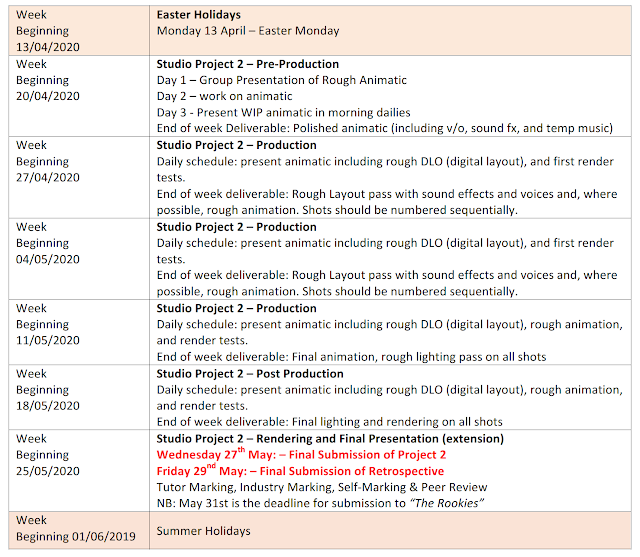 Final Submission for PR5001
In PR5001 students complete two short films, and write a single Retrospective at the end of the module, due on Monday 18th May.  The first short film is due on Wednesday 1st April at 11.59pm, with a short 10-15 minute group presentation on Thursday 2nd April. Students should present the film as a group, and also briefly present their blog and/or website showing how the film progressed.  The second short was due on Wednesday 13th May at 11.59pm, but this has been extended to Wednesday 27th May and follows the same format.  Both films must be entered into "The Rookies" by 31st May. The Retrospective is due on Friday 29th May.

Posted by Alexander Williams at 01:10