Many congratulations to Escapee Katerina Zacharakis who has recently started a new job as a production assistant with Sony at the Playstation London Studio, working alongside fellow Escapee Maddison Gould.

Playstation London was founded in 2002, and is located in the heart of Soho.  Their mission is to "pioneer new ways to tell stories and immerse the players in action, adventure and technology driven experiences."

Playstation London initially approached Escape Studios about sourcing some of our top talent, and we were able to match their needs with two recent graduates with the right skills. 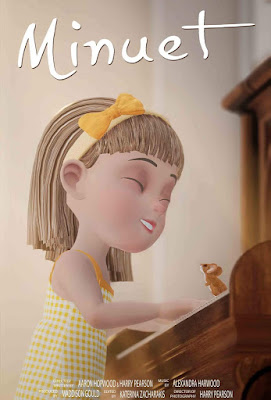 Katerina Zacharakis
Katerina graduated this summer from our BA in the Art of Computer Animation, where she specialised in animation production and editing, and worked on the award-winning short film Minuet. Minuet is a short film about a young concert pianist who, while preparing for her next performance, encounters misfortune - and finds help in an unlikely place.

Planet Mars
In her second year, Katerina was the producer of "Planet Mars",  a studio project at Escape Studios in which our undergraduate animators collaborated to produce a documentary (or "mockumentary") short film.

Planet Mars has now made the official selection for over a dozen international film festivals around the world.

Producing animation & VFX
Over the past three years Katerina has demonstrated her consistent ability to organise and run the animation production pipeline, ultimately delivering projects on time and on budget.

Katerina also took our Producing for VFX 6 week course at Escape Studios where, under the guidance of industry professionals Paula Pope and Martin Gabriel, and a number of other guest tutors, she was able to further develop her production skills.

The Escape Studios Animation Blog offers a personal view on the art of animation and visual effects. To find out more about our new BA/MArt, now recruiting for September 2020, follow this link.   To apply, visit the official page here.
Posted by Alexander Williams at 02:55