Congratulations to our student animators - the short films Minuet and The Golden Acorn are both finalists in the Golden Nugget Film Festival in London on Wednesday September 11th.

We'll be going along to cheer our students on, vote in the audience award, and offer applause and support.

Good luck to all our student film-makers as they showcase their talent and skill on the wider stage.

Pitch Stratford is a bar and restaurant, a "new open air space in the heart of Stratford", described as a "sunny, outdoor, colourful oasis just a short walk from Stratford station".

Minuet
With a running time of 5 minutes and 46 seconds, Minuet is our most ambitious short film to date. Directed by Aaron Hopwood and Harry Pearson, and produced by Maddison Gould, the project was animated in Maya, and rendered in Unreal Engine.

Studio Project
Minuet was developed from a pitch by Harry Pearson, and was completed as part of our third year undergraduate animation students' final year Studio Project, in which students collaborate to work together as a team.

The Golden Acorn
"The Golden Acorn" is a trailer completed by 2nd year undergraduate Escape Studios Animation students, as part of their Studio Project module, which comes half way through the second year.


Our second year students learned to work together in teams (not always an easy task, but essential for a career in industry), pitching projects to one another, selecting the best idea, and working towards a defined project brief. The project was directed Maciej Osuch and edited by Miguel Teixera. To see the Golden Acorn at the IMDB, follow this link.


Golden Nugget at Facebook
You can see more about the Golden Nugget Film Festival event at their Facebook events page here.
https://www.facebook.com/events/426456981296623/

Festival program on 11 September
Minuet and Golden Acorn open the program at 6.45pm. Don't be late! 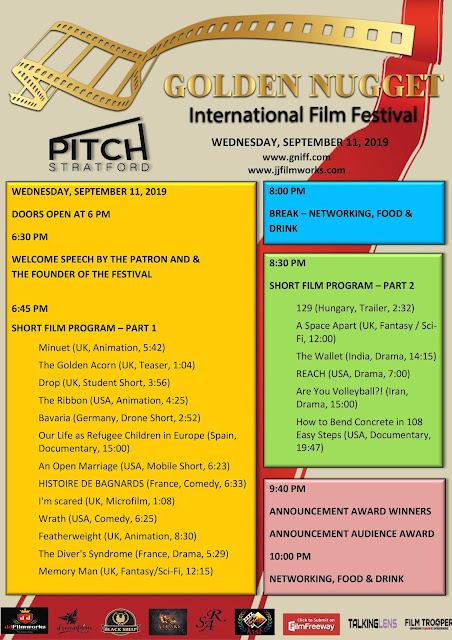 Posted by Alexander Williams at 02:33