On Saturday October 5th the makers of Jericho and Home Sweet Home represented Escape Studios at the 63rd BFI London Film Festival, with their films being screened as part of the Family Short Film Programme.

Ten short films were shown, including two from Disney and one from DreamWorks.

Three shorts were shown from the UK, and after the screening was over, our students were invited up to the front of the stage where the BFI's Justin Johnson did a short interview with each team.

BFI Film Festival
The BFI London Film Festival is an annual film festival founded in 1953 and held in London, running in the second half of October with co-operation from the British Film Institute.

It screens more than 300 films, documentaries and shorts from approximately 50 countries.

Interviews on stage
Our former students were interviewed by the BFI's Justin Johnson about their work on their films.

Sarah Andrews, director of Jericho, described it as "strange yet awesome seeing those films we worked so hard on, on a big cinema screen, and knowing that something we did may have inspired more kids to get into animation and film".

Justin Johnson did a short interview with each team, asking about the inspiration for the story, how long our students had to work on it, what their roles were, and what kind of budget they had to work with. 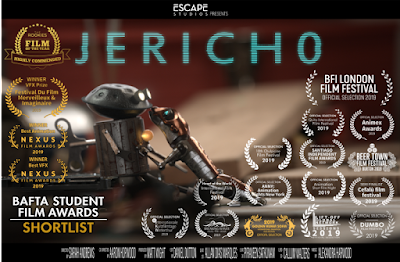 Jericho
Directed by Sarah Andrews and produced by Matt Wight, Jericho is a short film about a lonely robot who builds a friend, and was short-listed this year for a BAFTA Student Film Award.

Jericho was also "highly commended" at this year's Rookies competition, and it also won the 2019 VFX Prize at the Festival Film Merveilleux in Paris. 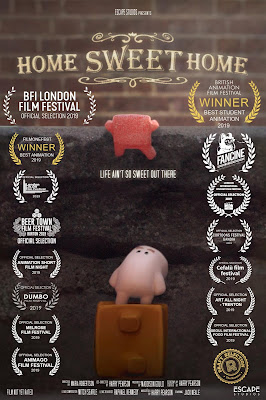 Home Sweet Home is a short film about a gang of sweets trying to make it back to their sweet shop home.

Being selected for the BFI London Film Festival is just the latest in a long line of successes for our graduating class of 2019, who have made a stellar performance at film festivals this year.

As a result, 100% of our graduating animation class now have their names attached to an award-winning film project, and have their own entry at the IMDB - an important milestone in any film career. 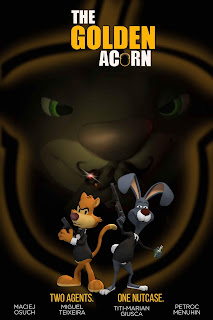 Golden Acorn
Our second-year animation students are also starting to get their films into international contests, such as Maciej Osuch and Miguel Texeira's trailer project "The Golden Acorn", which was recently selected for the Golden Nugget International Film Festival.

Escape Method
All of which demonstrates the effectiveness of the Escape Method - our own unique blend of individual personal tuition, online tutorials & feedback, and group project work - all of which combines to bring our students to a professional level of skill.

Posted by Alexander Williams at 01:04