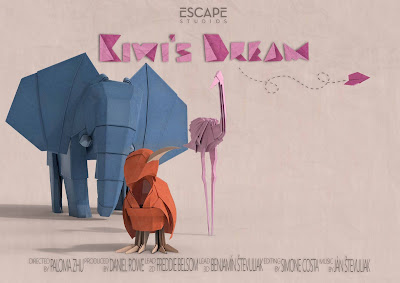 Meet "Kiwi's Dream", a new short animated film completed by students at Escape Studios.
Directed by Paloma Zhu and produced by Daniel Rowe, "Kiwi's Dream" is a short story about a group of origami animals dreaming of the world outside.
"Kiwi's Dream" was completed as part of the third year animation Module PR6001,  a Studio Project worth 60 Credits, and has recently been selected for its first film festival.
"Kiwi's Dream" - Final Film

Module PR6001
In Module PR6001 our animation and VFX students join forces for the first time to produce a short animated visual effects project, with three months to take the project from initial pitch to final render. Many of these VFX projects have gone on to enjoy festival success - follow this link to see a selection of award-winning films.

Student collaboration
Working with a team of ten students from both the VFX and animation departments, Kiwi's Dream was filmed on location in London, with animation and VFX completed at Escape Studios.  The live action plates were filmed by DOP Clement Gharini, then scanned and tracked.
Software
Animation was done in Autodesk Maya; compositing was done in Nuke and the shots were rendered in Arnold.  Editing was done in Davinci Resolve and Premiere Pro.
Director Paloma Zhu
"Kiwi's Dream" is the second short film directed by Paloma Zhu, a third year student at Escape Studios, who last year directed the award-winning short "Hotel Aloha", which won an award for "Most Charming Animation" at the Animafantasia Film Festival.
Award-winning films
Paloma has also contributed animation and storyboards to the award-winning "Quarantine Chorus", and worked as an animator on two other award-winning films: "Street Ratz" and "Flame".
"Kiwi's Dream" Credits
Project supervisors 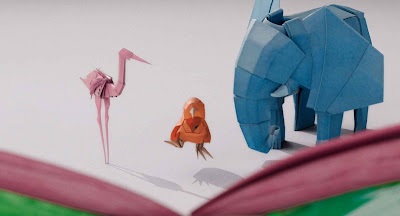 The project was overseen by our 3rd year tutors:

You can find "Kiwi's Dream" at the IMDB here.

The Escape Studios Animation Blog offers a personal view on the art of animation and visual effects. To find out more about our new BA/MArt, now recruiting for September 2021, follow this link.   To apply, visit the official page here.

Posted by Alexander Williams at 03:53