Many congratulations to the makers of the short film "Animal Lover", which has won "Best Animation" at the Flicks Film Festival in London.
"Animal Lover" is a one-minute animated short written and directed by Anastasia Gurova, produced by Priya Shah, and edited by Daniel Brand-Sinyinza.
This is the first festival award for "Animal Lover", which was a collaboration between students on our MA in Storyboarding and Previsualisation, and undergraduate students studying the art of computer animation. The film has also been a finalist in four festivals, and a semi-finalist in two.
Short Film-Animal Lover from Priya Shah on Vimeo.

Animal Lover
"Animal Lover"  is a one-minute animated short created at Escape Studios and inspired by director Anastasia Gurova's childhood experiences growing up in rural Russia.  Like "Street Ratz" and "Moon Rockz",  the film was a collaboration between students from our master's degree in Storyboarding & Previsualisation and undergraduate students studying the Art of Computer Animation. Animal Lover was produced by Priya Shah, who also produced the short film "Nefertiti".


Module PR5001 is a film-making module, the culmination of the second year of study at Escape Studios.

In this module students work together in teams, and the skills involved are just as much about film-making as they are about animation.

Animal Lover
Animal Lover was based on an original idea and storyboard developed by Anastasia Gurova.

Our 2nd year undergraduate animators collaborated with Anastasia to create the short film, in much the same way that the story and animation departments might collaborate in a commercial animation studio.

Animal Lover is a one minute short story based on Anastasia's childhood experiences growing up in Russia.

Animal Lover Storyboards
Anastasia put together the storyboard below, which helped to pitch the project internally at Escape Studios.


Development & pre-Production
To give the film a Russian flavour, Anastasia put together mood boards of Russian landscapes and costume to keep the story rooted in a particular time and place. The Russian steppe is flat, with a low horizon and relatively few small hills. 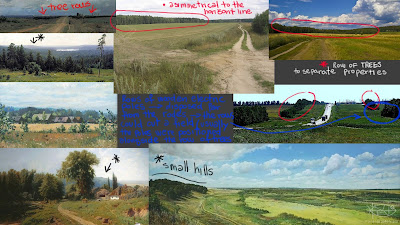 Landscape Mood Board
On the right you can see some of Anastasia's Russian landscape reference images. Important choices have to be made - where are we? A village? A hamlet? What time of day is it? What will dominate the colour palette - warm colours or cool colours?

Costume Mood Board
Anastasia also prepared a reference board to help with the clothing and costume design for the women in the story.

Country people in the 1990s in rural Russia were poor and did not dress fashionably; their appearance was not a priority as they had hard lives and had to work the soil.

The women dressed in long skirts mostly, often in hand-made textiles; no jeans or trousers.  Children would be randomly dressed, usually in hand-me-down clothes, and often grubby from playing outside.

Covid-19
The film was completed entirely from home during the Covid Pandemic. Our students collaborated remotely, animated and rendered their shots relying on their own home resources.

You can find "Animal Lover" at the IMDB here.  You can also find it among the winners at the Flicks Festival at their official site.

Credits
Festival entries
Animal Lover has already been selected for its first festival, the Prague Monthly Film Festival in June.

The Escape Studios Animation Blog offers a personal view on the art of animation and visual effects. To apply for our BA/MArt in 3D Animation, follow this link.  To apply for our storyboarding evening class, visit this page here.  For the next 12 week animation course, click here.
Posted by Alexander Williams at 14:07