Many congratulations to our second year undergraduate animation students who have just put the finishing touches on their second group project, a documentary short titled "Planet Mars".  Directed by animation undergraduate student Sebastian Kuder, Planet Mars was completed as part of the second year of animation studies at Escape Studios. To find out what really happened to life on Mars, a planet now entirely devoid of life, watch this short film. 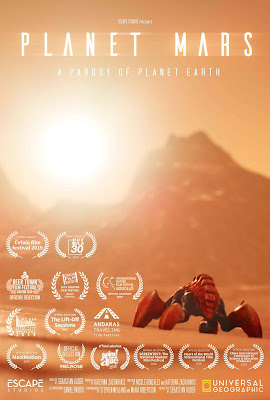 Planet Mars
Planet Mars is a documentary created and animated by 2nd year animation students at Escape Studios.  They had just six weeks to create the film, from concept to final render.

Team project
Planet Mars was completed as part of the second year of animation studies at Escape Studios, in which students collaborate to produce a number of short film projects.

Mentoring
The project was mentored by London VFX powerhouse Framestore, who kindly gave up 6 successive Fridays to come in to our classroom and offer feedback and notes to our students. Many thanks to Framestore and in particular to Simon Schlussel and Oz Gani for their tireless support.

Animation was completed in Maya 2018, rendering was done in Unreal Engine. You can see the project entered here at The Rookies.

To see more excellent work done by our students at Escape Studios, visit our YouTube channel.


Posted by Alexander Williams at 07:52