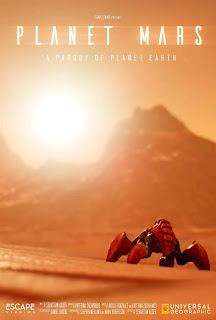 Next week our 2nd year undergraduates embark on the Studio Project Module, code-named PR5001, where students collaborate to work together to a professional brief.

This module is the culmination of the second year of study at Escape Studios.

The projects are designed to simulate as closely as possible the experience of working on a live client project, and reflect the kind of work that animators are asked to do in industry.

The Studio Project is worth 45 credits and runs for the next 12 weeks, from Monday 18 February until the end of May (with a week off for Easter).

The Studio Project is broken up into two projects, giving students the chance to practice digital film-making twice in a short space of time, and polish their story-telling skills.

Project 1 - A Teaser/Trailer for an animated film, game or TV Show
Project One is about creating a teaser or trailer for an animated film, game or TV show. The teaser or trailer should be feel authentic and believable, as if it were actually being broadcast for a real project. As with all narrative projects, students begin with a concept, develop this into a story, and write a short script. Once the script is approved, students begin to storyboard the project, and cut the boards into an animatic, complete with narration, music and sound effects (sound design).

Group work
The first task is for students to form themselves into groups, and decide among themselves who will perform what role.  Key roles include director, producer, writer, storyboard artist, art director, editor and - of course- animators. Projects will also need a CG supervisor to manage the digital pipeline and make sure the final renders work.

Examples
To see some examples of Project 1 from 2017-18, check out the clips below:

To see all the Teaser Trailer projects from 2017-18, follow this link.


The Studio Project takes us up to the end of May 2019 and is the last project for the 2018-19 academic year. It also involves entering the "Rookies" annual contest.

To see other documentary projects completed by our students last year, follow this link to Planet Middle Earth, and this link to Working with Dinosaurs.

Posted by Alexander Williams at 02:23