We're proud to present Adam & Eve: Mk II, a short animated film by Sebastian Kuder, an undergraduate animation student who is part of the first cohort of animators to graduate from Escape Studios this summer.  Adam & Eve: Mk II is a sci-fi re-telling of the Genesis story. Sebastian has directed and animated a number of short films at Escape Studios over the last three years; including the fan film Star Wars - the Escape, and Planet Mars, which has made the official selection for many animation festivals around the world. Adam & Ev Mk II was Sebastian's final project at Escape Studios. 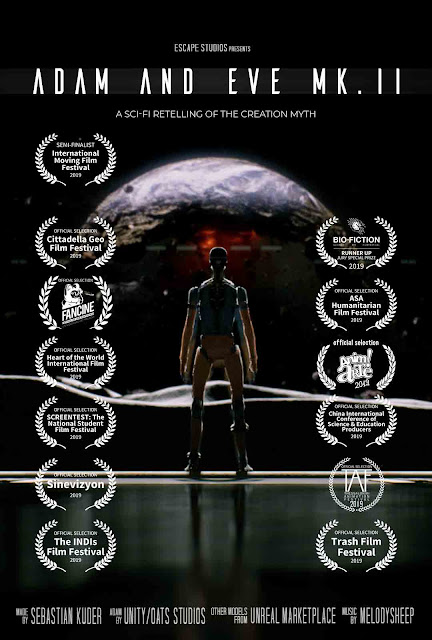 Inspiration
Adam and Eve Mk.II takes inspiration from the so-called "ImmortalityDrive" - a large memory device which was taken to the International Space Station in a Soyuz spacecraft on October 12, 2008.

Stock Footage
Destroyed Earth is taken from one of the episodes of Marvel’s Agents of S.H.I.E.L.D.
Stock footage in the flashback sequence is taken from Google and YouTube.

The Escape Studios Animation Blog offers a personal view on the art of animation and visual effects. To find out more about our new BA/MArt now recruiting for September 2019, follow this link. To apply, visit the official page here.
Posted by Alexander Williams at 12:12