At just under 6 minutes, Minuet is our most ambitious film to date at Escape Studios, completed by our recent animation graduates.

"The Golden Acorn" is a movie trailer completed by 2nd year undergraduate Escape Studios Animation students, as part of their Studio Project module. 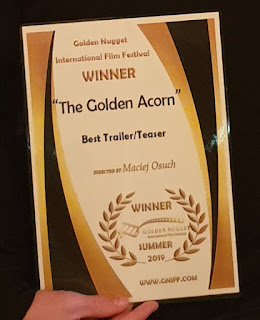 Golden Acorn
The Golden Acorn" is a spoof movie trailer completed by 2nd year undergraduate Escape Studios Animation students, as part of their Studio Project module, in which a bunny and cat detective duo team up in NutTown to defeat a squirrel crime boss. Congratulations to Maciej Osuch,  Miguel Teixera, Titi-Marian Giusca, Petroc Menuhin, Cuchulan O'Byrne and Sasha Batt on their success.

Minuet
Minuet was a collaboration between our third year animators. With a running time of 5 minutes and 46 seconds, Minuet is our most ambitious short film to date. Directed by Aaron Hopwood and Harry Pearson, and produced by Maddison Gould, the project was animated in Maya, and rendered in Unreal Engine.

PR5001 Studio Project
The 2nd year of animation studies at Escape Studios culminates in the Studio Project, a 12 week module worth 45 credits in which students collaborate to work together to a brief, designed as closely as possible to simulate working on a live client project.

The Studio Project Module comes half way through the second year and is the point at which studying at Escape Studios becomes much more creative; students learn to work together in teams, pitching projects to one another, selecting the best idea, and working towards a defined project brief.

Escape Method
The Studio Project runs for 12 weeks, with a week off for Easter, and forms part of what we call the Escape Method, our unique blend of intensive personal tuition combined with group project work that simulates working in a real studio environment.

Two films in the 2nd year
The Studio Project is broken up into two projects, giving our students the chance to practice their film-making skills twice in a short space of time.

This allows our animators to learn from their mistakes and develop a much more efficient and refined work flow.  The teaser/trailer is our students' first project, and has been entered into this year's "The Rookies" competition here.

To see some of the teasers and trailers animated last year by our undergraduate animators, follow this link.

To see the Golden Acorn at the IMDB, follow this link.

To see the Official 2019 Golden Nugget List of winners, see this page.
To see more about what's in the 2nd year at Escape Studios, follow this link.


The Escape Studios Animation Blog offers a personal view on the art of animation and visual effects. To find out more about our new BA/MArt, now recruiting for September 2019, follow this link.   To apply, visit the offical page here.

Posted by Alexander Williams at 01:58