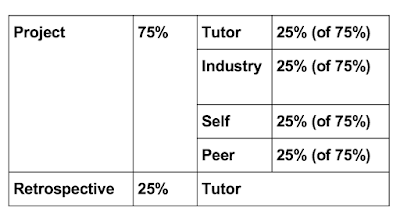 How do we mark Group Projects at Escape Studios?

Group work, also called Studio Projects, are marked according a formula which aims to take into account the judgment of tutors, industry, and our students themselves. 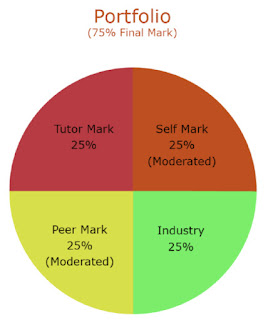 Project Mark - 75%
The Project Mark (sometimes called the Portfolio Mark) makes 75% of the final Module grade. The Project Mark is the same for everyone in the group, and is made up of 4 equal quartiles:
Tutor Mark
The Tutor Mark (25%) is your tutor's grade on the project. The grade is for the project, not for each students' contribution, so each person within the group will get the same tutor mark.

Industry Mark
The Industry Mark (25%) is the grade awarded to project by one of our industry partners. Like the Tutor Mark, this grade is for the project, not for each students' contribution, so each person within the group will get the same Industry Mark.

Peer Mark
The Peer Mark (25%) is awarded to the team by selected members of other teams. Around 4 or 5 Peer Marks are collected, and the results are averaged to produce a final Peer Mark. Again, each person in the group gets the same peer mark.

Self Mark
The Self Mark (25%) is one mark, awarded by the team to the team, and agreed - after appropriate internal discussion - by all the team members. The final Self Mark must be signed by all the team members prior to submission (note that the Self Mark, being potentially open to abuse - for obvious reasons - is subject to moderation). As with the Tutor, Industry and Peer Mark, everyone in the group gets the same mark.

The tutor Mark, Industry Mark, Peer Mark and Self Mark are then combined to produce an Interim Project Mark.

Group Modifier
Not everyone in the group will have made an equal contribution to the project, so the Interim Project Mark is subjected to a Modifier. The Modifier (which is carried out anonymously) allows moderation of the project mark to differentiate between the contributions of individuals within the group. Each member of the group has an allocation of marks that they can award to the other team members in proportion to their contribution.

For example, in a group of 6 students, each student would have 50 marks to award to the other five members. All 50 marks could be awarded to one group member, or the marks could be apportioned equally, where each member gets 10 marks, or any combination in between.

See the table below by way of example, in which Alex made a big contribution to the project, and Fred a rather smaller one.

Once the modifier marks are tabulated and an average produced, the average is used to adjust each students' final mark within the group. So, for example, see the table  below.


This algorithm produces the Final Project Mark for each individual student, which makes up 75% of their overall grade for the whole Module.

The remaining 25% is awarded for the Retrospective, a written summary of each students' personal contribution to the group project. Like all written work, the Retrospective is marked individually.