Escapee Guy Penwill was one of the interviewees at London Live recently (see the video above), talking about the BAFTA nominations, the state of the visual effects industry, and also about what we do here at Escape Studios to prepare our students for the job market.  He recently worked on Ex Machina, which last night won the Oscar for best Visual Effects. Guy's story is an especially inspiring one not just because he has succeeded in forging a great career in London's visual effects industry, but because of the remarkable chutzpah he showed in getting his career off the blocks. We asked him to talk to us about what it takes nowadays to make it in VFX.

Escape: What was your background before you came to study at Escape Studios?

Guy:  Before Escape I had gained a degree in Computer Science and I was providing technical support in a maths and computing science department within academia.

Escape: How was your experience studying at Escape Studios?

Guy: I knew that being on the course would give me the knoweldge to get into the industry. I attended the part-time compositing evening course, which was perfect. I could keep my full time job during the day and study in the evenings.

But it wasn't just the course content that attracted me to Escape Studios, it was the networking possibilities. Our tutor was still working in the industry and he had a wealth of experience. It was certainly benefitial knowing that we were being taught by someone who has first-hand experience of what was expected of us in the industry.


Escape: How did you break into the industry?

Guy: Trying to break into a new career, with no experience, is difficult. However, you need to try and make sure that your name or showreel is on the top of the pile. A recommendation can go a long way, but in the end, when you are trying to get your first role, it's down to your showreel and also on how you come across in the interview.

Getting the interview is the first step, you can have the names of all the recruiters, but unless you get a call for an interview, you are not going to get hired. When I tried to get a job, the first thing I did was emailed recruiters.

I also used Twitter to get the attention of some of the companies. It worked, but in the end, they said I needed more experience.

Time was running out, I had left my previous job to finish my portfolio and search for a job. I knew that smaller VFX companies require more generalists. Larger VFX companies will be after a particular skill. So I felt that going for a smaller company would be more beneficial.

In the end I had emailed one of the smaller companies but didn't get a reply, so I decided to just pay them a visit. I had my cv in one hand and laptop in the other and knocked on their door. I told them who I was and they agreed to have a quick chat, and a few weeks later they offered me a job as a Roto artist. 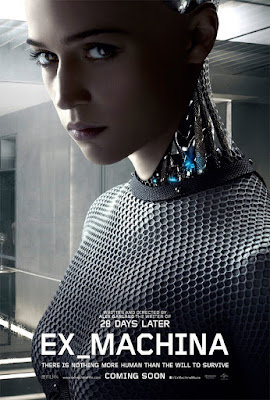 Escape: What is your favourite project you have worked on?

Guy:  Ex Machina would have to be my favourite. It was my first project I had worked on at Double Negative, so for that reason alone would certainly add some weight to my decision.

However, after working on many projects after Ex Machina, it's clear how well thought out the entire project was from day one. A lot of time had gone into the post production way before anything had been filmed. The appreciation for what we were trying to create was apparent across all disciplines. This was something that was going to have huge cultural impact and we all knew this.

The amount of effort that went into every frame of this project is clearly visible. With slow subtle camera moves, the shots were very unforgiving and there was no room for error. The leadership during the post production of this project was excellent, Andrew Whitehurst (VFX Supe) and Paul Norris (2D Supe) knew exactly what the client wanted. In addition, the time taken to plan out each shot on set allowed for a much smoother pipeline. Artists were able to spend their time on perfecting Ava, rather cleaning up sets and removing complicated rigging.


Escape: What advice would you give to students at Escape Studios to get the most out of their time here?

Guy: Ask questions. Do not be afraid to put your hand up. There will be other people in the room who want to ask the same question but are too afraid to ask. Talk to your colleagues. Don't sit there on your own, instead network with people. You never know when one of them might be able to help you get your first job.

You can see the films that Guy has worked on at his IMDB profile here:
http://www.imdb.com/name/nm5677030/

You can also see an interview with him here:

The Escape Studios Animation Blog offers a personal view on the art of animation and visual effects. To find out more about our new BA/MArt starting in September 2016, follow this link.   To apply, visit the offical page here.
Posted by Alexander Williams at 02:29