Meet "Candle Wick", the latest short animated film created by our second-year animation students as part of the group project module PR5001, in which students collaborate to make short animated films. "Candle Wick" was directed by Oliver Gallagher, co-directed by Shauna Ludgate, and produced by Emmanouil "Manos" Zervoudakis.  Art direction was by Tsvetelina Kumanova.
Candle Wick
"Candle Wick" is a short story about an adventurous candle living inside the walls of an old house. When he faces a life-threatening situation, he must venture outside to find a way to save his home.
Studios Project PR5001 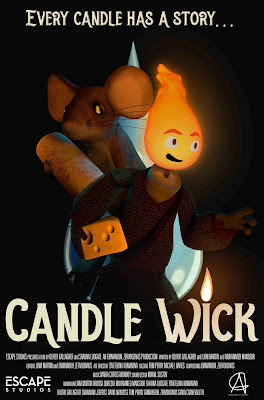 "Candle Wick" was completed as part of Studio Module PR5001, a collaborative module in which undergraduate students work together on short film projects, simulating as closely as possible the workings of a real animation studio.
The film was completed in six weeks.  It was animated in Autodesk Maya, edited in Adobe Premiere Pro, and rendered in Redshift.

"Candle Wick" Credits
Thanks to our Industry Friends
Many thanks to film producer and Disney veteran Max Howard, who provided invaluable critique and support throughout the project.
Candle Wick at the IMDB
You can find Candle Wick listed at the IMDB here.
Candle Wick Official Site
You can also find more about the film at the official blog.

Posted by Alexander Williams at 01:39