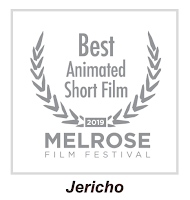 Many congratulations to director Sarah Andrews and the makers of the short film Jericho, completed by our third year undergraduate animation students, which has won Best Animation at the the Melrose Film Festival in Orlando, Florida.

Jericho is a short film about a lonely robot searching for a friend. It was shortlisted for a student BAFTA, and won Best Animation and Best VFX at the Nexus Film Festival earlier this year.

Jericho will be screened along with Home Sweet Home at the London Film Festival at the BFI on Saturday, October 5th.

Melrose Film Festival highlights the work of filmmakers across the globe. The annual festival, hosted at the Melrose Center in Downtown Orlando, is dedicated to celebrating the art of visual storytelling in short films, animation and music videos. You can see the official list of winners here.

Jericho
Directed by Sarah Andrews and produced by Matt Wight, Jericho is a short film about a lonely robot who builds a friend, and was short-listed this year for a BAFTA Student Film Award. Jericho was also "highly commended" at this year's Rookies competition, and it also won the 2019 VFX Prize at the Festival Film Merveilleux in Paris.

Jericho now has its own IMDB listing, which you can see here.


This week our third year animation and VFX students are embarking on their VFX projects. We heard pitches earlier this week, many of which were very promising, full of imagination and creative ideas.
We're excited to see what our students can achieve in this new academic year, building on the success of projects like Jericho.
To see more about what's in the 3rd year at Escape Studios, follow this link.
The Escape Studios Animation Blog offers a personal view on the art of animation and visual effects. To apply for our BA/MArt in 3D Animation, follow this link. To apply for our storyboarding evening class, visit this page here. For the next 12 week animation course, click here.
Posted by Alexander Williams at 02:04