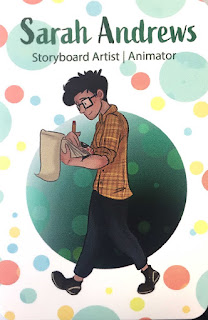 Sliced Bread is a multi-disciplined, multi-award-winning digital animation studio based in London, creating animation for a wide variety of clients, including Sony, Coca-Cola, Microsoft and Unilever.

Sarah Andrews is an award-winning animator and storyboard artist who has worked on many projects at Escape Studios; specialising in storyboarding in her final year. 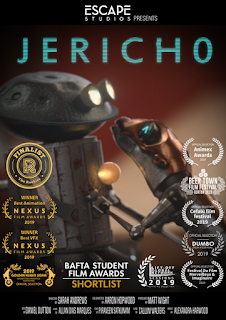 Jerich0
In her 3rd year at Escape Studios, Sarah wrote and directed "Jerich0", a highly successful short film that was short-listed for a student BAFTA, made the official selection for over a dozen film festivals, and was "highly commended" at this year's Rookies competition. Recently Jerich0 was selected for the BFI London Film Festival to be held in October 2019.

Sarah also storyboarded our most ambitious animated short films so far - "Minuet", and in her second year she storyboarded the mockumentary short film "Working with Dinosaurs".
Storyboarding Evening Class
Sarah also took the Escape Studios storyboard evening class, an 8 week introduction to the art and craft of storyboarding, taught by industry professional, Francesca "Chess" Adams.
MA in Storyboarding and Previsualisation
Escape Studios are also running a new MA in Storyboarding and Previsualisation, starting in September 2019, for those who want to dig deeper into the story and previs skillset.

The Escape Studios Animation Blog offers a personal view on the art of animation and visual effects. To find out more about our new BA/MArt, now recruiting for September 2019, follow this link.   To apply, visit the offical page here.

Posted by Alexander Williams at 13:04