Many congratulations to Escape Studios undergraduate animation student Maria Robertson for starting a new position as Junior Animator at Factory 42, an immersive and television content production studio based at Somerset House on the Strand.

Maria got the job at Factory 42 based on her excellent demo reel (a finalist in the 2019 "Rookies" competition) , and then a follow-up interview.

Award-winning animator
At Escape Studios, Maria worked hard to develop her skills as an animator. She wrote and directed the award-winning short film Home Sweet Home, which won the Best Student Film at the British Animation Film Festival. 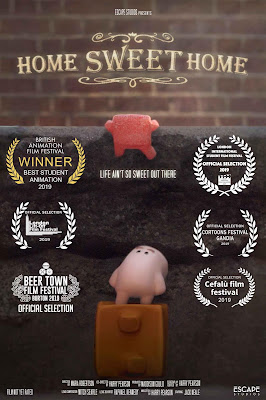 In her second year, Maria polished her creature animation skills on Planet Mars, a 2 1/2 minute short film which has made the official selection for multiple film festivals.

She also made a considerable contribution to the final year project Minuet, our most ambitious student project to date, which is also currently being entered into film festivals.

Maria's animation demo reel reached the finals at this year's Rookies contest for Rookie Animator of the Year.

Animation tutorials
Maria has also contributed a number of creature locomotion videos for our expanding Vimeo channel, showing how to animate quadrupeds (walks, trots and runs) and also a six legged creature.

Internships
Developing her career at an early stage, Maria also secured an internship in 2018 at The Mill in London, giving her hands-on experience of working in a studio on live client briefs.

Maria will be working alongside Harry Pearson, who also graduates from Escape Studios this summer.

Posted by Alexander Williams at 01:32