Escapees "Highly Commended" at The Rookies

The results of this year's "Rookies" contest are in and we're proud to congratulate the makers of "Jerich0", which was "Highly Commended" in the VFX Film category.

Our Games, VFX and Animation students made a stellar showing in this years' Rookies contest, with multiple projects reaching the finals in all three disciplines, and a number winning "Runner Up" or "Highly Commended".

Jerich0
The BAFTA Short-listed Short Jerich0 was directed by animator Sarah Andrews and produced by Matt Wight was "Highly Commended" in the category of VFX Film of the Year.

Jerich0 has been accepted in multiple film festivals and has won a number of awards, including Best Animation and Best VFX at the Nexus film festival.

Escape Studios Entries
Four undergraduate games projects made it to the Games finals.

In the category of Game of the Year - Console and PC, was The Last of London, a game set in a post-apocalyptic Piccadilly Circus.

In the Category of Game of the Year: Immersive Media, was The Order of Quadrivium - VR Escape Room, which won Runner Up. 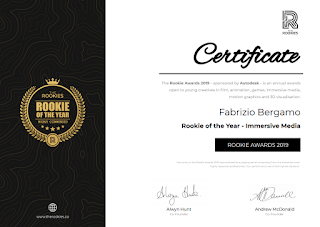 About the Rookies
The Rookie Awards 2019 received 3,548 entries from aspiring digital artists around the world. Finalists competed for awards for Rookie of the Year, Game of the Year, and Film of the Year. Also up for grabs were a number of Studio Internships and Educational Scholarships. Finalists were scored on creative skills, technical skills, presentation, variety of skills, complexity, raw talent, and employment potential.  Winners in each category were announced on July 16th.

https://www.therookies.co/entries/241 - The Order of Quadrivium - VR Escape Room. This project was a "Runner Up" in the Immersive Media Category.

The Escape Studios Animation Blog offers a personal view on the art of animation and visual effects. To find out more about our new BA/MArt now recruiting for September 2019, follow this link. To apply, visit the official page here.
Posted by Alexander Williams at 01:00