Facial Rigging at our Vimeo Channel

Escape Studios tutor Michael Davies has recorded a new series of videos on facial rigging for our Vimeo channel.

You can find the facial rigging tutorial here, along with hundreds of other video tutorials, available to our students and Escapees.

Facial rigging allows our students to create their own characters, and animate facial expressions and lipsync.

The tutorials demonstrate the geometry needed for facial rigging, how to create a head rig, as well as how to add deformers and driven controls.

Python scripting
Also included is an example of how scripting in Python can speed up your workflow, by automating tasks that would otherwise have to be done manually. 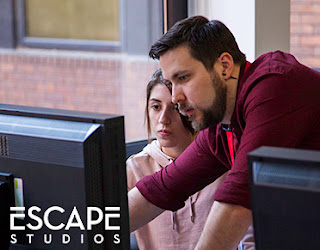 Michael Davies
Michael joined the animation team at Escape Studios just over a year ago; he has worked on many VFX blockbusters such as Batman vs Superman, Doctor Strange and Thor Ragnarok.  Michael's rigging credits are impressive: he rigged Smaug (The Hobbit) and also The Minions for the Illumination-McGuff studio.

Michael is also an Accredited Trainer for Maya at Autodesk, and for Unreal Engine.

To read an interview with Michael Davies, and find out more about his work, follow this link.

The Escape Studios Animation Blog offers a personal view on the art of animation and visual effects. To find out more about our new BA/MArt, now recruiting for September 2018, follow this link.  To apply, visit the offical page here.

Posted by Alexander Williams at 01:28