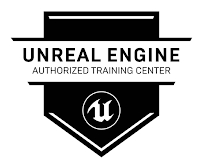 Head of Games Simon Fenton started developing the games course way back in 2008; since then it has changed beyond recognition, as has the games industry.

Authorized Training Center
Escape Studios is honoured to be selected to be part of the official program, and to help train people in the use of Unreal Engine, which powers not just our games projects at Escape Studios, but many of our short films, such as the award-winning Planet Mars and, most recently, Minuet, which has just received its first official selection at the Golden Nugget International Film Festival.

Unreal Engine
Unreal Engine delivers real-time rendering for the games industry and, increasingly, for the CGI industry as a whole, including animation, Previz, VR and Arch Vis.  Unreal Engine has become a core part of the Escape Studios games course and is fundamental in helping us train our students towards becoming industry ready talent for not only games but any of the rich and diverse fields currently using UE4.

Posted by Alexander Williams at 05:57