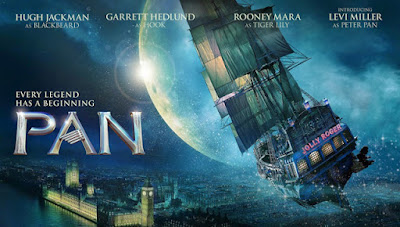 At the BlueGFX Expo on London’s South Bank last week, Stuart explained how Framestore pulled off the exceptional challenges of this effects-heavy film.

Pan is a prequel to Barry’s Peter Pan, and the story is about how Peter first got to NeverLand. Directed by Peter Wright, it stars Hugh Jackman “as you’ve never seen him before”.

The live action was filmed at Leavesden in Hertfordshire, where the Harry Potter series was made.

As is often the case with big projects, a number of visual effects houses worked on the film, including FrameStore, MPC, Scanline, and Rising Sun.

Neverland was designed as “a floating world, with huge oceans floating around in endless skies filled with clouds”. For the water effects they used Flush – their own in house system that works with Maya.

For the cloth simulations they used nCloth. Some of the shots involved trails of animated flying fish. Framestore “animated ribbons to guide the flock, then sent the results to the FX team to finish”.

In the movie, Blackbeard (Hugh Jackman) mines the bones of dead pixies to give him eternal youth. Framestore had to create “huge mines with massive crowds”. The work included “lots of performance capture of people mining, climbing ladders, and so forth”. The Visual Development work was all based on real shots of mines and strip mines, so the artwork was “not so much paintings as digital collages”.

The characters have to travel fifteen miles over the terrain in their flying galleon, so Framestore had “a huge environment to build”. To do this, they used fShambles (“don’t ask how it got its name”) a proprietary system that Framestore developed on Guardians of the Galaxy, which allows them to “lay out a lot of geometry, with lots of instances.  Rendering in Arnold, you can render “billions of polygons” without much difficulty.   They took “lots of photos of quarries, to get real footage”. This was scanned “and then taken into ZBrush to get a final polish”.

The trouble with matte paintings is “you can’t change the lighting much”, so it’s better generally “to build your environment if you can”. So Frame Store “matte painted colour maps”, using “detail that would hold up as a picture”. Then they “projected textures and passed that to the compositors, and then did a final DMP pass”. There were lots of render layers to comp together, all in separate layers.

In the movie, Peter rides in a cable car - which breaks - and they crash into a sailing ship, which then has to turn upside down. The deck of the ship was a real physical set – “filmed at Leavesden on a massive gimble so it could rotate and turn”, but then “the rest of the ship was green screen, filled in with CG ship”.

There were “lots of galleons to animate”, and also “crowds of pirates who all had to be hand animated in the end, since the motion capture didn’t really help.”

The cannon were real - they had real cannon firing on set. The clouds were volumetric effects. Initially they created “rough proxy models of clouds, which were converted into effects.”

In Nevercroc Alley, they had to create giant albino crocodiles. These started out as “highly stylized” crocodiles, but became in the end “a realistic croc”. Framestore “found an albino croc at the zoo for reference”, which helped a lot since “albino crocs are hard to do without looking silly”. Again, all the water effects were done in Flush. The digital Peter gets dragged under water by the croc, so this sequence relied heavily on the water effects.

Frame Store also created Mermaids. Fortunately, they had recently done a test for another film called “Mermaids” and, since the test was well received, “this was why they got the job”.  Unfortunately, the mermaids in Pan “were completely different”, so all the work had to be done from scratch.  The Pan mermaids had to have “long hair, and no fishy tails” since the client did “not want a fish”.  Their tails and fins had to feel “more like cloth”.

Doing underwater hair “is very hard”. The actress who played the mermaid was Cara Delevigne, who was photoscanned, and her tail was designed to feel “more like a jellyfish or a squid - not like a fish”.

The fins were “turned into cloth”. To film the shots, Cara was “strapped into a robot harness which moved her around”.

The trouble with CG hair is that “it does what it wants to do”. And, this was a problem since, “for reasons of modesty”, they had to make sure the hair simulation covered up Cara’s body. So they built “a system of guides to guide the hair”, so it would behave itself.  The mermaid tail “was an extra cloth sim on top”.  Finally, the lighting of all the composited elements had to match.  They added water sparkles and special “lens effects to make it all feel magical”.

At the end of the talk, Stuart answered questions, including the inevitable one from a student about how to find work with Framestore. His answer was “your show reel is crucial”. And more, “just doing a course isn’t enough” – you have to show what you achieved.

The interview is also very important because “the interviewer thinks – I must work with this person”, often under pressure. Do I want to work with them or not? And sometimes, “people just don’t fit in”.

With an eye on the local job market, I asked this question: “why did Framestore open up in Canada when there are now generous tax breaks in London"? Stuart replied “it’s about spreading the load”, giving the client "more options, and more flexibility". And, ironically, he added, Framestore “gets more work in London now that we have the studio on Canada as well.” So everyone has been a winner.


The Escape Studios Animation Blog is a personal view on the art of animation and visual effects. To find out more about our new BA/MA in the Art of Computer Animation starting in September 2016, see this post. And to apply, follow this link.

Posted by Alexander Williams at 01:10