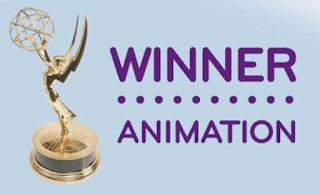 Rich said: "It is hard to put into words how wonderful that felt but there’s no doubt it’s down to the hard work of an incredibly dedicated team that I’m proud to be a part of and to the creative genius of Joe Brumm. Big thanks to Charlie, Sam, Daley, Joe and our amazing crew. This one’s for you!"

Bluey
Rich was the director on season two of Bluey, a TV series which Rich describes as "made by a bunch of incredibly hard working and talented artists of different disciplines", and "the brain child of Joe Brumm - an immensely talented writer and director".

Rich has been working on the show in Australia for the past two years, and it is now coming to screens on TVNZ on demand, as well as NZ prime time TV.

12 Week animation course
Rich took our 12 week course in 3D animation, and has since gone on to a enjoy a highly successful animation career Down Under, showing that Escapees can go on to enjoy careers at the very top of the animation industry, creating their own ideas and their own original content.

Blue Heeler Dog
Bluey is the story of a "loveable and inexhaustible six-year-old Australian Blue Heeler dog", and is made by a team of artists in Brisbane, Australia.

Rich said of Bluey: "We built it from the ground up, training all our crew. It's the result of loads of hard work and dedication from an amazing team of over 40 people. I'm proud to be a part of it and can say it is an honor to work on this series. "

Demo Reel
You can see Rich's excellent demo reel below, which he put together while studying at Escape Studios.


Career in animation Down Under

After leaving Escape Studios, Rich found work in London at Tiger Aspect Productions, where he directed a Pilot episode of Fingers McGraw for a new TV series.

Rich later moved to Australia, where he worked as a freelance animation artist at Studio Joho, creators of Dan The Man, and animators of The Adventures Of Kim Jong Un.  Later he became an animation director at Flux Animation, a boutique animation house based in Aukland, New Zealand.

To see an interview with Richard, including his tips for survival in the animation industry, follow this link.

You can find Bluey at IMDB here.  And you can find Rich Jeffrey's IMDB profile here.

Posted by Alexander Williams at 12:59