Secrets of The Jungle Book Revealed by MPC

The Secrets of The Jungle Book were revealed at the Escape Studios VFX Festival, with MPC's Ben Jones (CG Supervisor) explaining how the London VFX house brought the characters and creatures of this classic tale to life, re-imagining one of the best-loved of the Walt Disney Studio's animated films.

Ben Jones was "character supervisor" for the film, overseeing the building of the CG models, muscles, fur - "that sort of thing". It was "quite a special project", because the only "filmed element in the film was Mowgli", so it was "very close to being a CG feature", with the entire set being digital.

Everything on this film is "hand-made", all hand-keyframed. The project took two years, with at least 800 artists working in London, Los Angeles and Bangalore, doing around 1200 shots. The approach laid down by Jon Favreau was a "photoreal target look", and the film was all "pre-vis'ed" in advance.

It's a "talking animals movie", and animals don't talk, so they had to "suspend disbelief", and make this work. They wanted a key-framed pipeline, like the old Disney days, without much MoCap.  This was a nod to the traditional Disney way of doing things.

What does Virtual production mean?
MPC did not do the pre-viz. But if you "shoot Mowgli wrong", the "whole film is compromised".  So MPC did a "tech viz" pass, helping the film-makers to know "how to film each shot", creating "3D wraparound spheres" that the film-makers could use on set, based on "how MPC intended the shot to go into post".   Every shot on the film had this "tech-viz" pass, to enable the filmed work and CG work to integrate seamlessly.  Each shot also included 3D stereo, so it "worked in 3D', with an "immersive experience".

Software
There were "lots of different software packages used, such as Flowline, and also in-house tools, to create the seamlessly integrated final look of the film. They created a library of authentic plant assets, all hand-modelled to be as realistic as possible.

Rendering
"Millions upon millions of blades of grass" had to be rendered, ray-traced, and this was "very difficult", and took "a very long time". Even the rivers were built in CG - and the interactions with the animals all had to be made to look photo-real. 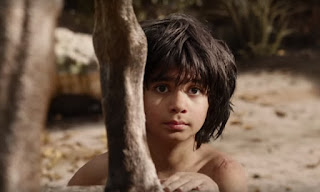 Mowgli acting
The actor who played Mowgli - Neel Sethi - did a lot of acting on set with real puppets - big stuffed toys, to make sure that the interaction was all there.

Animation
MPC had an "amazing animation team", and everything was hand-animated. They began with concept art, and sculpts, and animation tests. They "always used reference", focusing on real wildlife footage to inform the facial expressions and body animation.

This focus on real reference gave the animation "a particular naturalism". All this work was presented to director Jon Favreau for his approval, and it was vital that all the animals were anatomically correct, with bones, muscles, fat, flesh and skin built into the rig.

In the end, the rigs "need to be highly dependable" - so you can do thousands of shots on the film. And all the animals "had to do a screen test", just "like an actor would". And Jon Favreau gave notes on their performance. So each animal "was cast in the film", with "no exceptions".

Realism is "very hard" with cats - because audiences are "so familiar with them". So the tricky thing is that "you don't have any license - it had to be realistic".  Are we there yet? Is the result really fully photo-real? Not quite.

They did Bagheira first, got that right, and then did the others. The animators "did thousands of motion cycles" creating a "library-based approach" that was "not shot-specific".  The tiger, for example, is a "bag of flesh", and "very complex", but it's the "secondary animation that sells it" - the overlapping action of all the physical elements that make up the cat's body.

The facial animation had to be "subtle", else it "would not feel real".  It had "to feel natural", not necessarily "animating every phoneme". The facial expressions were key, with "lots of the animation time being spent on the face".

Are MPC hiring?
Yes! And a tip for animators - get some lions on your reel. If you want to do some "really difficult stuff", come to MPC.


The Escape Studios Animation Blog offers a personal view on the art of animation and visual effects. To apply for our new BA/MArt starting in September 2017, follow this link.

Posted by Alexander Williams at 01:02