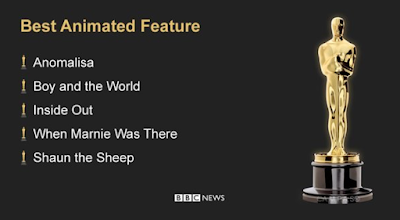 Who will win the Oscar this year for Best Animated Feature Film?

This year there are five nominees: Anomalisa, Boy and The World, Inside Out, When Marnie Was There, and Shaun The Sheep, by Aardman Animation in Bristol.

Animation has surely come of age. Just a few years ago there were three nominees in the category, and the category itself is only 15 years old,  having been first created in 2001. Prior to that, there were so few animated films every year that it would have been a one-horse race, with Disney winning every time.


The question this year is: can the UK's Aardman Animation take home the golden statue?

We'd like to think so, and here at Escape Studios we are rooting for the home team. Aardman are the UK's most successful animation company, consistently producing excellent films with charming characters and delightful stories.

Shaun The Sheep is a funny, clever film, told almost entirely in pantomime but no less entertaining for that.

To read about our recent visit to Aardman, follow this link.

However, Shaun The Sheep has stiff competition this year, and we suspect the smart money may be on Inside Out, a hugely entertaining film and one of Pixar's cleverest and best.

The nominations for Best Animated Short are also in. They are:
Richard William's Prologue is another one to watch. See our recent blog post here to find out about this excellent hand-drawn film, a unique and remarkable piece of work.

The 88th Academy Awards ceremony, presented by the Academy of Motion Picture Arts and Sciences, takes place on February 28, 2016, at the Dolby Theatre in Hollywood, Los Angeles.

The Escape Studios Animation Blog offers a personal view on the art of animation and visual effects. To apply for our new BA/MA starting in September 2016, follow this link.
Posted by Alexander Williams at 06:59