This is a great result for a film that was only entered into film festivals for the first time last week. 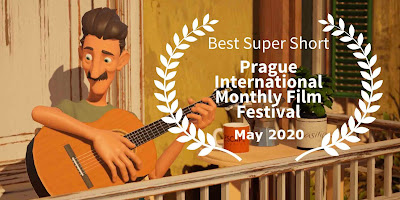 Quarantine Chorus
Set in Italy and inspired by a real-life love story from Verona, Italy, "Quarantine Chorus" is a short story about the persistence of the human spirit under difficult circumstances.

Directed by Edoardo Sartori and produced by Nickoel Izharudin, the film was based on an original idea by Tequila Mason. The film was completed entirely from home during the Covid Pandemic. Our students collaborated remotely, animated and rendered their shots relying only on their own home resources.

Escape Studios Festival News
Here at Escape Studios we now have over two dozen films in festival competition.  Despite the challenges caused by the Corona lockdown, and many festivals cancelling or moving online, our student films continue to experience growing festival success.


Adam & Eve Mk II
Multi-award-winning "Adam & Eve Mk II", directed by Sebastian Kuder, has been winning awards in film festivals for almost a year.  It has also been selected for three upcoming festivals: 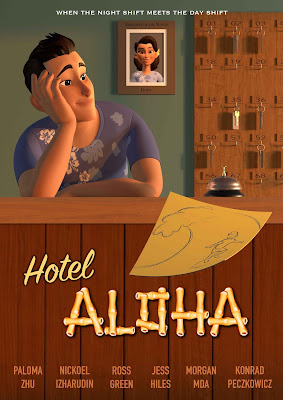 Joe
Joe is a story about a cleanup robot that goes wrong. It was directed by Callum Reeve and Produced by Aidan Lonergan. Joe has also been selected for:

Hotel Aloha, directed by Paloma Zhu, has been accepted for three festivals:

Death From Above, directed by 2nd year animation student Jordan Coles, was a finalist in the TMFF - The Monthly Film Festival on April 30th. It has also been selected for five upcoming festivals:

Jerich0
BAFTA-shortlisted Jerich0, directed by Sarah Andrews, is in
Flame
Flame, directed by Cherelle Owusu and produced by Carolina Xavier, is in many upcoming festivals:

Offcut
Offcut, directed by Petroc Menuhin, which follows the adventures of a discarded scrap of wood who comes to life and finds meaning in music, will be screened at: 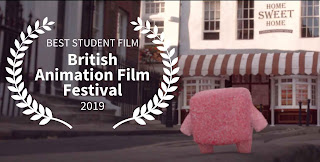 Jelly Cars
Jelly Cars has been selected for: 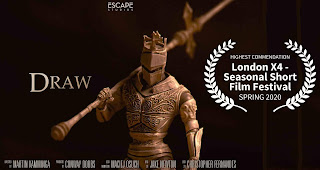 "Draw" has been selected for: 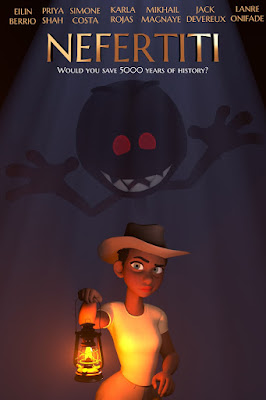 Nefertiti
Nefertiti, directed by Eilin Berrio Pena, is in

Hat Shop
Hat Shop, directed by Stevie Stedman, has been selected for the Zeitimpuls Film Festival in Austria on June 22-27.

The Escape Studios Animation Blog offers a personal view on the art of animation and visual effects. To apply for our BA/MArt in 3D Animation, follow this link.  To apply for our storyboarding evening class, visit this page here. For the next 12 week animation course, click here.
Posted by Alexander Williams at 02:41