Veteran Animation Producer Producer Bob Thompson is consulting with the makers of the award-winning film "Jerich0", which has recently returned from a virtual trip to Stuttgart, home of Animation Production Days (APD).

APD is an international forum to bring together animation talent with potential co-producers, broadcasters and distributors of original creative content.

"Jerich0" has proved itself a festival winner; the next step is to take it to a wider audience, with the potential for broadcast and distribution through commercial channels. 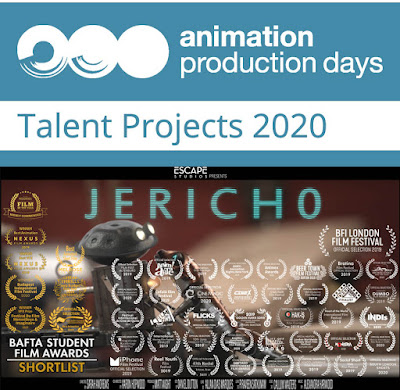 About Jerich0
Jerich0, directed by Escapee Sarah Andrews, is a short film about a lonely robot searching for a friend, and has won multiple awards in international film festivals.

Jerich0 at APD
Jerich0 attended APD remotely, due to the Corona lockdown.  APD went ahead this year with one-on-one meetings scheduled via Zoom, continuing the APD strategy to forge successful partnerships between animation talent and potential co-producers, broadcasters and distributors of original creative content. APD takes place annually in Stuttgart, running alongside the FMX Festival.

APD Feedback
At APD the Jerich0 team spoke to a number of leading animation companies, including Amazon Prime, Blue Zoo, Wildbrain and Nickelodeon. They received "amazing feedback", with a number of follow up meetings scheduled.

About Bob Thompson
Veteran animation producer Bob Thompson brings his experience of producing independent animated films such as the Bionicle series and Ultramarines, as well as commercials, post-production and VFX.

Bob Thompson has worked as a Producer for the BBC and as the Head of Film for LEGO. He has developed and produced four feature length animations and has also worked on 3D attractions, television shows, toys, games and theme park rides and more than 30 different media categories.  Bob is the founder of Good Story Productions who provide creative development, production, VFX and Post Production services & facilities for Film and other media.

Bob will be able to offer assistance to the Jerich0 team on strategy, budgets and schedules, helping them to take their pitch to the next level.

The Escape Studios Animation Blog offers a personal view on the art of animation and visual effects. To find out more about our new BA/MArt, now recruiting for September 2020, follow this link.   To apply, visit the official page here.
Posted by Alexander Williams at 02:27