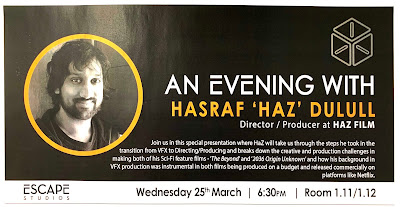 Join us on Wednesday 25th March for one of our regular "Evening with..." events at Escape Studios.

The event takes place on Wednesday 25 March as we welcome Hasraf "Haz" Dulull to talk about making the transition from award-winning visual effects to directing and producing his own independent sci-fi feature films.

About Haz Dulull
Writer-director-producer HaZ Dulull started as a Visual Effects Artist on feature films such as The Dark Knight and Hellboy 2. He quickly progressed to a VFX Supervisor role and was nominated for several VES awards on shows like Planet Dinosaur (BBC) and America: The Story of US (Discovery).  He then become a VFX Producer on series like Poldark Season 1 and The Aliens.

Awards
Haz was nominated three times for outstanding VFX at the 2011 and 2012 VES Awards in various categories. His film "The Beyond" won Best Sc-Fi feature at the 2017 Atlanta Film Festival, and Best VFX at the 2017 Berlin Sci-Fi Fest.

Book your free space
As always, we recommend that all our animation students attend events like this one. Come along and ask questions, such as "how did you get your first break as a director?". "What does it take become a VFX producer?"

Where and when
Wednesday 25 March at 190 High Holborn, London WC1

The Escape Studios Animation Blog offers a personal view on the art of animation and visual effects. To find out more about our BA/MArt, now recruiting for September 2020, follow this link.   To apply, visit the official page here.

Posted by Alexander Williams at 07:33