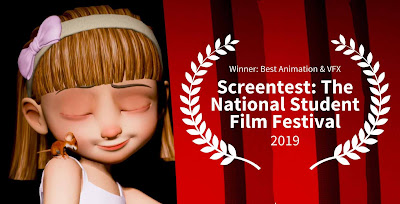 Congratulations to the makers of Minuet, which has won Best Animation & VFX at Screentest, the National Student Film Festival.

Minuet was a Finalist at ScreenTest, the London Student Film Festival, which took place on Friday November 15th and Saturday November 16th.

It was originally founded at Bristol University in 2004 and relocated to London in 2011, first at London Southbank University, and later at the University of Greenwich.

Where and when
The Festival took place from November 15th - 16th in the Stockwell Building at the University of Greenwich.
The awards ceremony took place on Saturday evening. 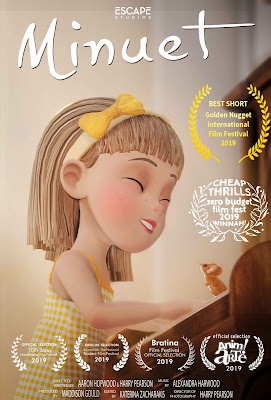 Screentest also ran workshops and panels throughout the two days, as well as a programme of over 100 student-made short films as well including workshops and screenings from a range of film industry organisations, including BAFTA and The BFI.

Minuet
With a running time of 5 minutes and 46 seconds, Minuet is our most ambitious short film to date.

Overseen by third year animation tutor Michael Davies, the project was animated in Maya, and rendered in Unreal Engine.

Minuet is a short film about a young concert pianist who, while preparing for her next performance, encounters misfortune - and finds help in an unlikely place.

Minuet has already been accepted into multiple film festivals and has won awards this year for Best Animation at the Golden Nugget Film Festival and also the 2019 No Budget Film Festival.

The Escape Studios Animation Blog offers a personal view on the art of animation and visual effects. To find out more about our BA/MArt, follow this link.  To apply, visit the official page here.

Posted by Alexander Williams at 01:47