The tutorial uses the free Parasite crab rig by Truong, and explains how to animate a six legged creature doing a performance (in this case, a mating dance), based on live action reference.

Maria explains how she created her mating dance animation for the Xye Crab in the mockumentary short "Planet Mars", an award-winning second-year undergraduate film project directed by Sebastian Kuder. 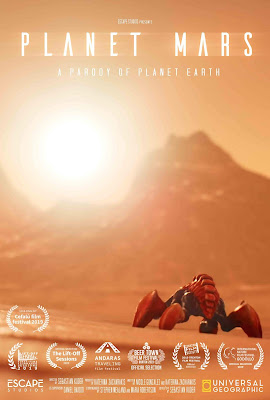 Maria shows how to build and block out the shot, from scratch. Animators are actors, and we need to create a memorable performance, but we also need a workflow that we can depend upon. In the case of animal performances, this almost always means using and building on live action reference.

Parasite rig by Truong
The tutorial uses the excellent free Parasite Rig from Truong CG, and available for free download from his official site. However, you can use any multi-legged rig you like, and apply the same principles set out in the tutorial.

There are of course plenty of other free crab and spider rigs out there, and the same principles can be applied to all of them.

Planet Mars
Truong's Parasite rig starred as the "Xye Crab", a highly endangered alien species that was the hero of one of our second year undergraduate group projects, a documentary short titled "Planet Mars".

The project was completed as part of the second year of animation studies at Escape Studios. To find out what happened to life on Mars, watch this 3 minute film.

Our students had just six weeks to create the film, from concept to final render. Animation was done in Maya 2018, rendering was done in Unreal Engine. The lead animator was Maria Robertson, who has now prepared this series of videos to show how it was done.

Vimeo Channel
To find the video at our Vimeo channel, follow this link. Like all our videos, this one is password-protected, meaning it is only available for our current students and Escapees.

Posted by Alexander Williams at 02:01