When To Use Maya's World Control

When should animators use the World Control to animate in Maya? The short answer is: "never". But, as with most rules, real life is not quite as simple as that, and there are exceptions to the rule.

Since this is an area of some confusion for animators learning to to use Maya, here's a brief outline of what the rules of World Control Etiquette really are. 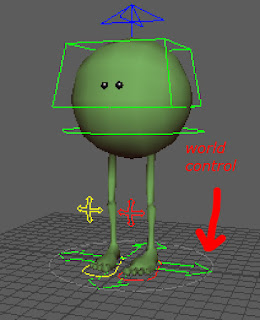 What is the world control?
The World control is the control on a character or creature rig which allows it to be moved into position. It is also sometimes called the World Mover, the Global Control, or the God Control. It is at the very top of the animation hierarchy, and supersedes all the other controls, hence its name.

On Monty (see right) the World Control is a big cross located at the base of the character rig.  Monty, by the way, is one of the best rigs for learning character animation. You can see a post about him here.

Why should you not use it for animation?
Because it creates confusion. If you set keyframes on your world control to move your character, you will have to counter-animate other controls such as the body and the feet. This will create two sets of curves which counteract one another, and make it very hard to edit your curves.

This actually happened to me on the very first shot I animated on "Robots" at Blue Sky Studios. I animated the whole shot on the World Control, and was told by the animation supervisor I would have to start over. I never made the same mistake again.

So why in video tutorials do you sometimes animate on the World control?
Sometimes you have no choice. For example, if you are animating a walk cycle "on the spot", you may need to set a keyframe on the World Mover in order to create a sense of forward movement. This is because training rigs are generally highly simplified to make learning Maya easier.

So it is bad to animate on the World Control?
Generally, yes. But when you are animating motion cycles with simple rigs, then you may have no choice.

The Escape Studios Animation Blog offers a personal view on the art of animation and visual effects. To apply for our new BA/MA starting in September 2017, follow this link.
Posted by Alexander Williams at 01:22