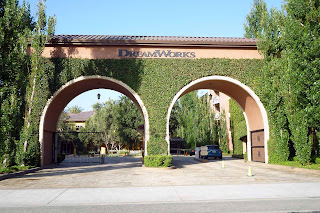 It looks like Jeffrey Katzenberg is leaving DreamWorks Animation, after over 20 years helming what has become one of the most successful animation studios in the world.

There has been no announcement yet, and DreamWorks animators all seem to be sworn to secrecy, but this does look like the end for Jeffrey's long reign. So, what does this mean for the future of DreamWorks animation?

The arches that lead into DreamWorks animation are even bigger than the one at Paramount - and this is surely not an accident.

It is hard not to be impressed by the size and elegance of Jeffrey Katzenberg's Glendale animation studio.

I was lucky enough to work there for four years, from 1998 to 2002, on three animated film projects: The Road to El Dorado, Spirit - Stallion of the Cimarron, and Sinbad.

These films were not big box office hits, but all three were crammed with excellent work, lovingly crafted by a very talented crew.  And initial box office disppointment did not stop Jeffrey, who pressed forward with his vision until the Shrek franchise eventually brought global success.

At the time, I did not realise quite how fortunate I was to work there. Stepping onto the DreamWorks lot is a remarkable experience - there are fountains, lakes, waterfalls, ducks nesting in the pond, and paved avenues lined with trees.

No expense was spared to create what is called a "campus", but actually feels more like an Italian Renaissance town, complete with campanile, olive groves - and of course an excellent restaurant (which had the added advantage of being free).

Jeffrey Katzenberg's achievement was to take on Disney at their own game, and win. His studio took a while to become a hit-factory but, like Pixar, DreamWorks assumed Walt's mantle and inherited his legacy.

The new boss of DreamWorks animation will, presumably, be Chris Meladandri, who helmed Fox animation in the early 2000s (Ice Age, Robots) and then created the hit Despicable Me and Minions franchises.

Unlike Jeffrey, Chris is a cost-cutter, making hit movies on barebones budgets.

So, for now, DreamWorks animators are a little nervous, anxiously awaiting an uncertain future.

The Escape Studios Animation Blog offers a personal view on the art of animation and visual effects. To apply for our new BA/MArt starting in September 2016, follow this link.
Posted by Alexander Williams at 08:56