As everyone knows, 3D animation starts with a hand-drawn storyboard process, then goes to 3D Layout, and finally to animation.

But what if you could combine the storyboard process and 3D Layout, to make your animation pipeline work faster, with fewer mistakes?

This is what Redboard, a new animation and pre-via storyboard software, aims to do. And best of all, it actually works.

What is Redboard?
Redbird describes itself as a "revolutionary technology that lets you accurately plan and manage your 3D animation production from the storyboard stage and then seamlessly transfer camera and scene data into your 3D workflow".

What does that mean in practice?
Redboard is a hybrid technology that allows storyboard artists to use low-poly 3D assets to speed up their work.

Then, they sketch over the top, to make the character poses and expressions stronger.

So it's a bit like doing PreViz in Maya then?
Yes, but it's simpler, and more versatile, because in effect Redboard combines the process of storyboard and layout by going straight to 3D layout.  According to Blue Zoo animation: "this saves the production a ton of work, because you don't need to have a whole extra 3D layout process after storyboards are done".

To see how Redboard works in detail, follow this link to their in-house tutorials. And to see my Redboard how-to tutorial, watch this video. 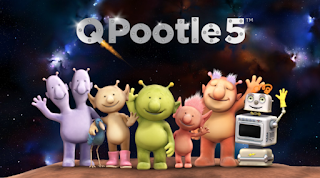 Blue Zoo, one of the UK's biggest independent animation companies, uses Redboard for its TV shows, including QPootle 5, which we reported on last year.

Does Redboard have a downside?
The only possible disadvantage of Redboard is, according to Blue Zoo, that it "tends to restrict the performance of the board artists somewhat", because they are focused less on character expressions and more on camera and layout. However, by "using the drawing tools on top of the 3D models, story artists are able to make the characters look dynamic and interesting".

Who developed Redboard?
Redboard was developed by Jerry Hibbert, part of the team behind Hibbert Ralph Animation.

Is it easy to learn?
Yes. It was designed with traditional story board artists in mind, so the tools are deliberately streamlined to make it super easy to learn and use.

Posted by Alexander Williams at 23:34