How MPC Created a Digital Arnold for Terminator Genisys

At the recent BlueGFX Expo at London’s South Bank, Moving Picture Company (MPC) Software Developer Marco Romeo talked about some of the recent work done by MPC on the film Terminator Genisys.  In particular, he described how MPC painstakingly rebuilt a digital version of the young Arnold Schwarzenegger (to do battle in the movie with the real Arnold), using a better facial rigging system with Fabric, and using new facial simulation research.

Here at Escape Studios we always recommend that our students attend events like BlueGFX Expo, and of course the upcoming VFX Festival in February 2016.   You never know who you will meet, and what you will learn about the latest technology in our industry. 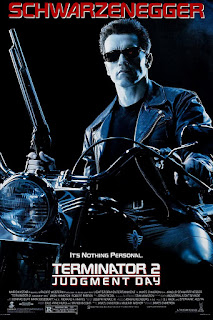 Terminator Genisys
At the heart of the project was creating a digital Arnold Schwarzenegger, but one based on Arnold as he was 25 years ago.  To do this, they filmed Arnold as he is today, and used this footage to help rebuild him digitally as a young man, adding shaders to “make him look believable”.

This involved getting all the subtleties right - even the detail of “the blood flow under the skin”. They also had to carefully study the real Arnold, to capture how his facial muscles worked “in order to make it seem real. “

The vectors helped to modify the linear nature of a blend shape, since, by themselves, “blend shapes are not believable enough”. VBS “applies tweaks to the target shapes”, allowing “the deformations to be spread around without having to go back to modeling department for time-consuming changes. The VBS system “gives lots of flexibility for the animators”.

MPC set out “to improve this process a lot, to simplify it, and to give the artists more creative control”. With a faster rig, the animators can work faster, and be better at their job.

They used Fabric Engine – which is a “digital contentcreation platform”. It’s a  system “which enables you to create complex networks of stuff like deformers”.

Fabric Engine uses the KL programming language – which is very simple, much simpler than C++. They used Canvas – the standalone version of Fabric.

The system also helps to transfer blend shapes from one rig to another, and creates “much less work for the modellers”.  Rather than have to make big adjustments to the new blend shapes, “they just add details”.  The system uses  vector blendshapes within Fabric, and “can be plugged into Maya”; the whole pipeline “still works”.


Facial Simulation Research
In the movie, the real Arnold has to fight a version of himself: a digital – and much younger – Arnold. To do this they needed “a full facial system with fat and skin”. They even needed “blend shapes for gravity acting upon Arnold’s face" since, as Marco put it "it all gets very complex when you make muscle rigs”.

You can "transfer facial rigs across characters", but sometimes "we have to make non-human characters too". The first test was done with in-house tool called Kali.  The goal is to make the system resemble the anatomy of a real face.

At the end, Marco took questions from the audience, in particular about hiring recent graduates. He said that at MPC “the interview is vital”. At interview, he wants to know “does the candidate really know what they are talking about?  Is the candidate lying at any stage?” And the big question is:  “will he or she fit in” at MPC? That said, MPC “do hire many juniors “, so the overall outlook for graduates is positive.

Posted by Alexander Williams at 01:11