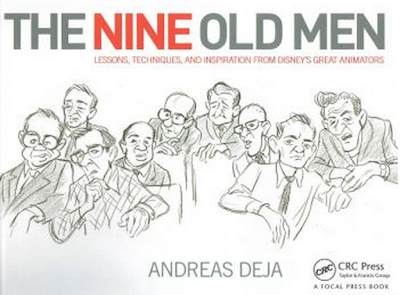 In this excellent podcast from The Bancroft Bros, Tom and Tony interview legendary Disney animator Andreas Deja (Gaston, Hercules, Scar) about his new book on the masters of Disney animation: The Nine Old Men.

But who were the Nine Old Men? And why should we still care? The answer is, these were the animators who created, developed and nurtured the original Disney style.

It's not an exaggeration to say that they created the medium of animation and made it what it is today.

The Nine Old Men joined Disney in the 1930s, when they were still rather rather young men, and together they helped to shape the studio's early style.

Throughout the 1940s, 1950s and 1960s they were the backbone of Disney animation, and they continued to do great work even after Walt Disney's death in 1966.

Andreas Deja joined the Disney studio in the 1980s, when the seven of the Nine Old Men were still alive. They had retired, and were no longer active at the studio, but Andreas befriended them and got to know them well. This book is the result of the friendship that he had with these Disney legends.

I was lucky enough to work with Andreas on "Lion King", when as a rookie animator he took me on to his team on the villain "Scar", voiced by Jeremy Irons.  I learned a great deal from Andreas about giving a character real personality; Scar was not just a brilliantly animated character, he became in Andreas' hands one of the greatest ever Disney villains.

I haven't read the book yet, but it's definitely on my Christmas list, and it will be in our library here at Escape Studios.

Posted by Alexander Williams at 05:04