Stuart Sumida is one of the leading experts in Hollywood for animal locomotion on feature films, not just on traditional 2D pictures like “Spirit”- Stallion of the Cimarron”, or “Lion King”, but also modern 3D films like DreamWorks’ “How to Train Your Dragon”.

Stuart describes himself as “a paleontologist who gets to work with animators” and, in between teaching anatomy to medical students, he consults on movies for Disney, Pixar and DreamWorks. I was personally lucky enough to work with him both on "Lion King" and also on "Spirit".

At last week's VFX Festival in Dublin, Stuart showed what makes him such a unique resource for animators dealing with the challenges of animal locomotion. 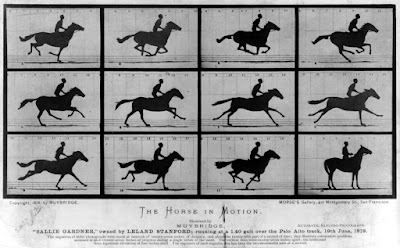 It’s hard to imagine that anyone knows more about animal locomotion than Stuart Sumida.

You might think that there are just three basic animal gaits: the walk, the trot, and the run. But you’d be wrong. There are many subtle variations and each animal does things in a unique and different way.

For animators who need to understand quadruped locomotion, these subtle differences can be what makes your work believable.

Walks
That said, walk cycles “are basically the same across all quadrupeds”. A standard animal walk is “hind-front hind front”. That is to say, the hind leg leads, firing off the front leg, then the next hind leg, and so on in succession. All animals walk this way; at least, all quadrupeds do.

But there are some differences. For example, in big cats, they have very big shoulder blades, so these are much more visible than in other animals.

So what is a walk? A walk is in essence “an ultra-stable gait”. The animal “either has three limbs on the ground - a triangle of support - or two opposing limbs”. A walk is a “very stable” structure for locomotion.

Edward Muybridge
Where does Stuart recommend that animators get their information on animal locomotion? Edward Muybridge is still the classic resource. Muybridge himself was apparently not just a talented photographer, but also “an important figure in California history”.

He was employed by Leland Stanford, the “railroad baron and the founder of Stanford university”, working with his stable of racehorses. Muybridge killed a man in an argument (his wife had cheated on him), but Stanford helped to get Muybridge off on a plea of temporary insanity – creating new law in the process, and allowing Muybridge to continue his pioneering work in the photography of animal locomotion. Best of all, Muybridge’s work is “in now the public domain. His stuff is free.”

Stuart consulted on animal locomotion on many pictures including the first Narnia movie – The Lion The Witch and The Wardrobe on which Rhythm and Hues pioneered muscle systems that took their animation to new levels of believability.

In the early Aslan walk tests, you can see the vibrations in the muscles as Aslan walks, as the muscles fire when tensed and slacken when relaxed. The CG Supervisor on the picture was “Bill Westenhoffer, who went on to win an Oscar for Golden Compass and Life of Pi”.

The Amble
There are also “intermediate gaits” between a walk, a trot and a run. For example, “an amble is a speeded-up walk”. It has “the same footfall sequence, but it’s faster”. Big dogs often do it, and horse experts speak of a “high lead amble, verging on trotting”.

Animal locomotion has long been a challenge for animators and, according to DreamWorks animator James Baxter, Samson in Disney's Sleeping Beauty was “the first time they really got it all right”.

The Pace
Pacing (left) is another possible gait. “Camels are the classic pacers”. Horses don’t pace naturally, but they “can be trained to do it”.  Often “big dogs will pace so as not to bang their limbs together”.

A pace is what Stuart describes as “a two beat gait”. ie “Clip clop clip clop”.

The pace is much like a trot, but the legs are doing the same motion on each side.

The Trot
Trotting is much more common than pacing. It is - in theory at least - “a symmetrical gait”, though in practice “a trot is rarely perfectly symmetrical”. A trot “can be quite cartoony, it can be funny.” The trot works on the basis of “diagonal couplets” of legs working together.

There are “two kinds of trots – the two beat and the four beat trot”. A two-beat trot is the standard trot, but it’s a bit more cartoony.

In a four beat trot, the hind foot contacts the ground just before – maybe just one frame before - the opposite forefoot. So you hear four contacts instead of two. This is a little more common than the two-beat trot; it’s slightly more complex, and feels “slightly more natural”.

A “suspended trot” has the animal “hang in the air a bit more”. Again, this feels “a bit more cartoony.”

Gallop
The gallop by contrast is almost always “a four beat gait”. It is a “complex motion”. Notice that “when you run, after a while your breathing starts to get in time with your motion”. Animals are the same. Quadrupeds inhale when they are in the air, and exhale when they hit the ground. It’s the natural rhythm of the gait. And there are different kinds of gallop – the “rotary gallop and the transverse gallop”.

Stuart has worked with many animators who have tackled these challenges. For example, the horse in Mulan was animated by the very talented Alex Kuperschmidt, and Ruben Aquino did an excellent rotary gallop close-up on The Lion King – which still holds up well today.  Scott Johnson was the CG supervisor on The Lion King and was responsible for the excellent wildebeest stampede.

Online Reference
There is increasingly great reference available online, in particular from the National Geographic. Their footage of a cheetah running in slow motion is stunning, and you can really see that the cheetah’s head is rock solid while the body moves all around it. And the tail stays stable too.

The problem of size
When it comes to animal locomotion, “size matters”. Small animals are “much more bendy”. For example, “they can bound”. The bound “is is a three beat gait – hind, front - front.” Mice do this often.  Stuart worked on this for Pixar on Ratatouille. Rats are small, and animals have very big thigh muscles - all the power comes from the back legs.

On Ratatouille, Remy “had to be like a rat”. In the original cut of the movie he didn’t really look much like a rat and he spent most of his time on two legs; he was “too human”. So Brad Bird was brought it as a fresh director “to make Remy feel more like a rat”. At Pixar, Stuart met Brad Bird, who said just two words to him: “more ratty”, and then left. The key point was that “the first time you see Remy, you have to believe he is a rodent”.

The bigger you are, “the more you are affected by gravity”. Big animals “have to keep their limbs straight just in order to stay upright”. And galloping is difficult if you are big. A Giraffe is “about as big as you can get and still gallop”. Bigger animals like elephants “cannot gallop – they are just too big”. So when elephants want to run, they instead “do a really fast walk”.


The elephant in George of the Jungle had to be animated to behave like a dog, even though it was an elephant. The CG team first rigged it like an elephant, but it didn’t work, so they had to “rig it like a dog”, because in the movie, “he thinks he’s a dog”. The animation was funny, but in reality “an elephant cannot do this.”

Toothless in How To Train Your Dragon is supposed to be a dragon - but he’s really your house cat.

Dinosaurs
As for dinosaur movies, they take big liberties. But, after all, Jurassic Park is not paleontology. It’s not a documentary.  Big dinosaurs almost certainly could not rear up on their hind legs as they did in the movie. Their bodies would likely have collapsed under their own weight if they had tried to do this.  So the clip below - says Stuart - couldn't happen.


Stuart also worked on Disney’s Dinosaur, which he described as “a very weird film.” It was “beautiful but stupid”, since the story “made no sense”. The “motion was great but the movie was stupid”.

Flying things “are hard because it’s tough to get the feel of weight and mass”. Creature things may look like fantasy creatures but in reality “they are things we know”. A centaur is just “a man’s torso stuck on a horse’s body”. The question on a creature movie is “do we know enough about the component parts to know where and how to sew them together?”

Of course, once you build all these assets, you get to re-use them in subsequent films. Many studios re-use their animal assets, and why not? It creates production efficiencies and saves money.

The Escape Studios Animation Blog is a personal view on the art of animation and visual effects. To find out more about our new BA/MA starting in September 2016, follow this link.   To apply, visit the offical page here.

Posted by Alexander Williams at 00:01