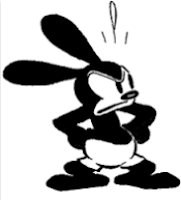 The BFI were digging around recently in the back of their sofa (The BFI National Archive) and guess what they found? Not just the missing remote and a ton of loose change, but a long-lost Disney short featuring Oswald the Lucky Rabbit, the character created by Walt Disney before he struck gold with Mickey Mouse.

The film is called Sleigh Bells and was first released in 1928. You can buy tickets to see the film yourself at BFI on London's South Bank.

But first - who the heck was Oswald the Lucky Rabbit anyway?

Oswald the Lucky Rabbit was created by Walt Disney back in 1927, when he was still a young animation pioneer trying to make a name for himself. Oswald was one of his first cartoon creations, and was animated by the talented Ub Iwerks, who would stay with Disney for much of his career.

But Walt lost the copyright in Oswald to Charles Mintz, who poached Disney's animators and continued to make Oswald cartoons without him. Disney's reaction to the loss of Oswald was to create Mickey Mouse, the character who would go on to eclipse Oswald completely.

The print of Sleigh Bells was found in the collections of the BFI National Archive, where it sat un-noticed for decades. The rediscovery was made by a sharp-eyed researcher who was browsing the catalogue.

Do animators need to know all this stuff? Of course! Studying the history of animation is part of every animator's education. We all stand on the shoulders of giants, and no-one was a bigger giant in our industry than Walt himself.

And to watch one of the first Oswald films, watch the video at YouTube below.