What Was It Like To Work on The Iron Giant? 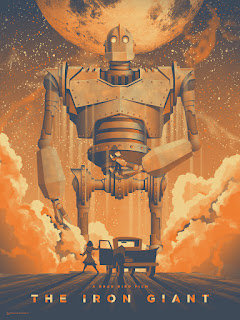 Brad Bird's animation classic The Iron Giant has just been re-released in theatres in the USA, a fitting tribute to a film which, though critically acclaimed, seriously under-performed at the box office when it was first released in the summer of 1999.

In this excellent blog post, animator Stefan Franck reflects on  what it was like to work on The Iron Giant under the leadership of the supremely talented Brad Bird.

For all of us who worked on the film, its box-office failure was a massive shock.  We were devastated.  How could such a great film perform so poorly? Why did no-one want to see it?

Inevitably, conspiracy theories grew. The studio wanted to kill it (because corporations love losing money!).  It was a deliberate tax write-off. The marketing department screwed up.  "They" wanted to close down Warner Bros Feature Animation. "They" wanted to teach Brad Bird a lesson.

Whatever the reason, the film was released in mid-August 1999 and made very little money at the Box Office.  It was a flop.  A turkey.  And Warner Bros did not close their feature animation division, at least - not yet.  They made one more film - Osmosis Jones, which also flopped, at which point the feature animation division was finally shut down.

For everyone who enjoyed the privilege of working on Iron Giant under Brad, it was a wonderful experience because we had the chance to work with a director who not only knew what he wanted (which is rarer than you might think), but he knew how to express it.

At Brad's animation dailies, each animator's shot was broadcast on a giant white board, on which Brad would draw over your animation poses in a dry-erase marker and correct your work in real time. This could be terrifying, but it was highly effective. No animator left that room without a clear vision of where to go next.

I still shudder to recall one dailies session where Brad said to me "you've done the exact opposite of what I wanted".  I cringed, wanting the ground to swallow me up.  But he wasn't being cruel. He was just being clear.  Brad showed me exactly what he wanted instead; I made the changes, and at the next animation dailies the shot got approved. It's still on my demo reel.

Brad taught me a lot. One of the tricks he regularly focused on was the importance of what he called "The Magic Circle". A super simple principle of good staging, you can see what he was talking about in a video I recorded with some students in Denmark many years later.

So three cheers for Warner Bros for chancing a re-release of a movie that has already failed once - undeservedly - at the box office.

Let's hope it does better this time around.

Posted by Alexander Williams at 03:58